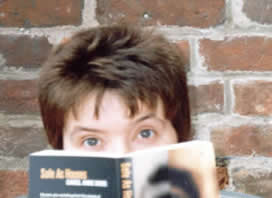 I left school as soon as it was legal and started work as an office junior. I’m sure they’ve never forgotten me. They let me loose on their telephone exchange and the words “Carol, you’ve cut us off again!” soon became commonplace. I moved on before they could fire me, this time to a clerical assistant post. Again, I caused administrative chaos wherever I went.

Like many late developers, I drifted from one soporific job to the next before discovering academia. I took Highers, an A-Level, a Master of Arts degree and a postgraduate diploma in Community & Adult Education before the grants ran out. A careers officer then asked me what I’d do if I could ignore what I’d been told by my parents and peer group. (i.e. that I was stupid and would never amount to anything.) My eyes filled with tears and I admitted that I’d always wanted to write.

Someone told me about the Enterprise Allowance Scheme which paid new businesses forty pounds a week. I read of one person who’d been taken on as a writer but knew of several others who had applied and been immediately rejected. I went to the Careers Office and told them of all the real jobs I’d failed at, about how I’d been called the “Master Storyteller” at school, about this being the one thing I felt I could do. There wasn’t a dry eye in the house by the end of my monologue and I swear I heard the faint sound of violins.

A few weeks later I was an official writer with a business plan, the most optimistic document I’ve ever invented. The bank manager said he’d expect to see my name in lights in a couple of years. He must be a very disappointed man.

I was a publishing whore from the start, going after every paid opportunity. Readers letters, health stories, teenage and adult fiction, triumph over tragedy articles all winged their way from my typewriter – and often winged their way equally quickly back. But in between the rejection slips were encouraging personal letters from desperate editors and even the occasional acceptance cheque.

In my first month I made twenty five pounds. In my second I made nothing. In my third I made a fiver. It was a story of rags to rags. One month my earnings were a box of shortbread as runner up prize in a humorous poetry competition, a ten pound book token for a teletext letter of the week, a T-shirt and cap as a prize for a letter to a music magazine and a pen for yet another letter. Hardly the Stephen King story revisited.

But I got better at both writing and finding outlets for my work, and was soon writing regularly for teen titles like Jackie and Catch, which paid eighty pounds per story. I also started to write features for Scottish newspapers, averaging about seventy quid an article there. When I’d built up a good list of fiction and feature outlets I started to teach non-fiction for a well known writing course.

I’d been making a modest living from writing and tuition for years before The Do-Not Press made me into a crime novelist by taking on Shrouded.

I wanted to know more about what happens to us after death, so I researched the ways that different cultures treat their corpses. I also wanted to know what morticians do to the human body, what exactly they mean by laying out.

I was allowed to go behind the scenes, not just to view the flower-filled Chapel Of Rest that the mourners visit but to explore the stark reality of the mortuary Preparation Room. Seeing the metal prep table and the containers of formaldehyde wasn’t a forbidding experience: not knowing what happens to us before we’re put into our coffins used to chill me more.

I was also curious about why a man would want to have carnal knowledge of a cadaver. Researching Shrouded gave me some of the answers. For a few people it’s a positive choice, not brought on by the inability to gain access to a live sexual partner. I had two women email me after the book was published who had female friends who were necrophiliacs.

I learned something new from each communication. For example, I said to one male correspondent that I suspected would-be necrophiliacs had a romanticised view of sex with a corpse, that they didn’t realise they’d lie on the body and that watery blood and other liquids would come out of its mouth and other orifices. I said the reality would destroy their fantasies. He replied: “I have friends that are blood fetishists who would disagree with you.” I hadn’t known blood fetishists existed. Scope perhaps for another crime book?

As I’d hoped, readers who have no interest in necrophilia have enjoyed Shrouded because of its other themes. E.g. how we turn lively children into hopeless inadequates. People who can’t cope aren’t born that way, they’re made.

On Writing Safe As Houses

I’ve always been interested in domestic and street crime — I grew up in a climate of fear, did some criminology at university, worked with abused women, participated in the first Women Against Crime course in Scotland. I’ve witnessed dysfunctional adult relationships, know what happens when parents batter a child’s body and try to crush its emergent ego to a pulp.

I started reading novels about serial killers and found most of them completely unbelievable, as if the authors had no genuine feel for the killer’s violent past or current thought processes. Some of the authors were writing about working class life (given that most serial killers are working class) yet seemed to be on a different planet. So in Safe As Houses I tried to write a realistic book.

One eek of the week was how quickly people tried to typecast my work. After Shrouded I had a chapbook published in the States called Expiry Date. Reviewers praised it (your cheques are in the post, guys) but said things like “Davis is already cornering the market for dark outsider characters.” As Safe As Houses also involved an outsider, I wanted to start with undamaged characters for my third crime book.

This time I take a normal professional couple and put them into extraordinary circumstances which makes the wife increasingly ill. At first her husband plots to repel then to maim one of his enemies. As the pressure intensifies he begins to kill…

“Carol Anne Davis writes with dangerous authority about the deadly everyday. Her work is dark in ways that Ruth Rendell and Minette Walters can only dream of. This is our world, skewed and skewered, revealed in its true sanguinary colours. You’ve got to read her.” – Ian Rankin

“A tight, imaginatively written book that I would advise anyone to read.” – West Coast Magazine

“It could well be the début of the year. Davis writes with force – with a remarkable feeling of menace.” – Janice Young, Yorkshire Post

Carol Anne Davis’ own website can be found at www.carolannedavis.co.uk