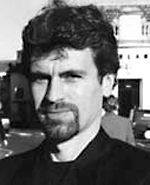 Jerry Raine was born in Yorkshire and educated in Surrey. At the age of sixteen, he moved to Australia where he worked as a farmhand and caravan-fitter, and made his singing début in some of Sydney’s seedier bars.

Returning to England, he worked in a variety of jobs until the age of forty-one, when his first novel, Smalltime, was published by The Do-Not Press. Small Change is the sequel to Smalltime, and in between he wrote a couple more for a larger publisher.

As a singer-songwriter, Jerry has shared the stage with Iris DeMent, Christy Moore, Steve Forbert, Gretchen Peters and others.

“The real find is Smalltime, a quietly jolting first novel that offers an unsparing look at some sullen hoods in a depressed London suburb” – New York Times

“In Hollywood parlance, Smalltime is Trainspotting’s Irvine Welsh meets Stanley Kubrick (circa The Killing)… a book to read slowly and savour” – Interzone

“Jerry Raine is a master of the suburban crime thriller. His prose is compelling and his insight into the mind of criminals unsparing.” – The Times

Novels by Jerry Raine (published by The Do-Not Press)

The Jerry Raine page on Amazon.co.uk