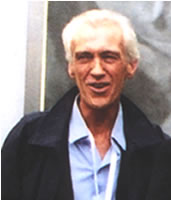 KEN BRUEN was born in Galway in 1951 and is the author of 12 previous novels, five of which have been published by The Do-Not Press. He’s worked as English teacher in Africa, Japan, South East Asia and South America. A film of the novel Her Last Call To Louis MacNeice is currently in production and his WHITE TRILOGY (A White Arrest, Taming The Alien and The McDead – of which this is the follow-up) has been bought for television by Deep Indigo Productions.

Ken Bruen lives in Galway with his wife and daughter. He is also the author of the Jack Taylor series (The Guards – to buy from Amazon click here; The Killing of the Tinkers and The Magdelain Martyrs) published by the leading Irish independent publishing house, Brandon.

“Bruen uses a clipped, telegraphic style – reminiscent of James Ellroy’s White Jazz … he infuses his story with a brand of humour that is alternately sly, bizarre, ribald and very dark” – Booklist (USA)

“Bruen’s writing is lean, mean and deliciously sharp” Time Out

Novels by Ken Bruen (published by The Do-Not Press):