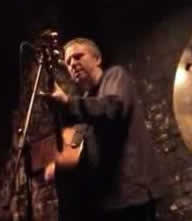 I got my first real guitar when I was fourteen, a three-quarter scale Japanese acoustic. Before that I’d had several unsuccessful attempts at making one. They were strung up with fuse wire and were usually unplayable.

My sister was learning folk guitar with the TV series, Hold Down A Chord. The back page of the tutor book had diagrams of all the chord shapes. When she lost interest and went to university I tore the back page off and learned all the chords on it – dominant, sub-dominant, tonic and minor. I didn’t know what any of that meant but I could soon do it in all twelve key signatures.

A couple of boys in my class were forming a folk group. They asked me to join. I didn’t really want to play folk music but it was a start. Two acoustic guitars and a boy on the electric bass whose dad was a Baptist minister. The boy looked like a Baptist minister too – he even had the haircut – but he was delusional enough to see himself as a Noel Redding figure, a titan of the bass guitar. He tried to persuade me to take up the drums, then the other boy would have to get an electric guitar and we could be a proper rock group.

The other boy really wanted to play folk music and I didn’t want to be a drummer so we learned to play Colours by Donovan and fizzled out in the wake of a couple of Gordon Lightfoot and Tom Paxton tunes. The Baptist minister’s son got himself a white Hofner Galaxy that looked a bit like Jimi’s Strat, the other boy grew up and started playing in folk clubs, and I was the confused kid trying to write songs that bridged the gap between John Mayall’s Bluesbreakers and Pink Floyd.

I got a full-size Eko acoustic guitar and electrified it by sticking the earpieces from a pair of army surplus headphones to the body. I plugged it into a homemade ten-watt amplifier given to me by a local TV repair man that I met at a jazz club. All the heavy-duty musicians were into jazz – it said they were in the Melody Maker, so I went to a local jazz club at a pub in Peacehaven called the Gay Highlander.

I had some difficulty reconciling Monty Sunshine & His Jazz Men with Jack Bruce talking about something called bebop, and I couldn’t imagine how Captain Beefheart could have been influenced by this, but I was prepared to give it a try. I went home confused – my head ringing with trumpets, trombones, clarinets and banjos.

The Pier Hotel was rough. I saw loads of fights in there. It was what you might call bohemian, which is another way of saying it was full of low-life beatnik scum. It was refurbished in the late ’70s and renamed the Buccaneer. Then it turned into the Escape Club. They don’t have jazz there any more.

I bought an Ornette Colman record – The Art Of The Improvisers. I was gong to buy Hot Buttered Soul by Isaac Hayes but they’d sold out so I bought the Ornette Colman album instead. At last I understood. I couldn’t begin to play this stuff and I wasn’t sure that I wanted to but I started to understand something about freedom in music. I was done with trad jazz.

When I was fifteen the school I turned into a mixed comprehensive. Lewes County Grammar School For Boys no longer existed. Neither did the Girls Grammar School or the Secondary Modern. We were all together now under one banner – Priory Comprehensive. I didn’t give a damn about comprehensive – what interested me was girls, and suddenly there were loads of them.

At the end of the fourth year the old regime was still in place – apartheid for boys and girls. The train home was divided in half – we had two carriages each – girls in the front, boys in the back. Prefects patrolled the train to make sure there were no transgressions. When the train arrived in Newhaven we were allowed to talk to girls as we walked to the bus stop but once we got there we had to queue separately.

There was a system in place – one week the girls queued at the front, the next week the boys. It didn’t make any difference who queued where really because when the bus came that was segregated too – girls downstairs, boys on top. When it rained the prefects waited in the bus shelter but we had to stand two abreast in the wet. There weren’t any members of the public to consider because the bus stop was halfway along a deserted and wind-blasted stretch of road outside the Bevan Funnel reproduction furniture factory. Nobody in their right mind would wait for a bus there.

On the journey to school none of these rules applied – it was beyond the bounds of possibility that we could get sexually aroused at quarter past eight in the morning. But care was taken nonetheless – the girls’ summer school uniform, 1960s coat dresses with buttons all the way down the front, had to be redesigned because the temptation could prove too much for the boys – we might find ourselves unbuttoning them in an unsegregated moment.

At the beginning of the fifth year this regime was abolished. The senior biology master gave us boys a bit of fatherly advice and counselling – he explained how babies were made:

The man supports his weight on his elbows, inserts his erect penis into the lady’s vagina and stimulates himself by means of vigorous thrusting movements until he achieves ejaculation. This fertilises the female egg, which hatches out into a baby nine months later. If that happens the man has a responsibility, so he must be very careful.

And that’s why, in a darkened field at a pop concert with the lights flashing and music pulsating, so many young lives are ruined.

It crossed my mind that a man of his age should really know about wearing a johnny. But it sounded fabulous – I could hardly wait, and I’d promise to be careful. I was hoping to try some marijuana too.

Click for article by Eric Goulden on Writing ‘A Dysfuctional Success’