INTRODUCTION: Strippers of the World Unite! by Ana Lopes

Previous books and articles about stripping were written by journalists and academics. What will strike you about this lovely book is that, for once, at last you

can hear the voices, the unedited words of real live striptease artists themselves. It is a treat indeed.

I am a Portuguese student of Anthropology living in London. In order to fund my PhD I took a job in a phone-sex-line company. I soon became a sex worker activist and started the International Union of Sex Workers (IUSW). This has brought me into contact with some absolutely wonderful characters in this multi million-pound industry. In particular, the strippers I met were proud, amusing and very sexy. I really admire them. I feel extremely inspired by this group of creative, adventurous and independent women.

My own attempts at stripping have not got very far (but I persevere by taking lessons). I have been in a samba band for a few years and recognise the similarity; samba movements are very provocative and the costumes extremely skimpy. Both dance forms are a colourful celebration of one’s body and sexuality. Both mean: ‘Here I am. I am beautiful. I am not sinful or wrong.’

I also identify with striptease in my phone-sex-line work where every word is carefully crafted to extract money out of the customer. It is similar to the striptease dance: the tease, the fantasy making.

I know all about the social stigma that accompanies sex workers. The women in this book and most sex workers I have met choose their careers yet have to defend their work against the moral opinions of our time. 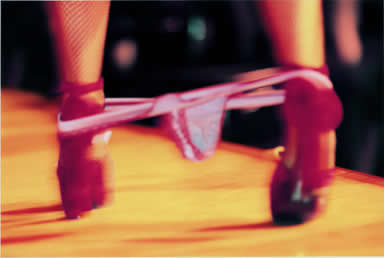 Some feminists claim that strippers’ work, or any other type of sex work – even sex itself – is immoral. The women in the sex trade are labelled traitors because they allow themselves to be denigrated. On the other hand, many of us feel empowered by sexual art forms. This does not seem to clash with feminism.

Many of us choose to work in the sex industry in order to liberate ourselves and affirm our sexual identity. As I’ve found with phone-sex, many striptease dancers find that working in this industry has increased their personal strength. We are constantly admired and adored, which makes us feel beautiful and powerful. Plus, just working in the sex industry can be a thrill – defying traditional mores and the social roles imposed on us and daring to be sexually assertive and to live our sexuality to the full.

Stigmatisation and censorship were born of legislation. In 1953, the Lord Chamberlain banned ‘any performance commonly known as striptease’. Thus, shows were driven underground and took place in private member clubs. These flourished in Soho until 1968 when the Labour Government lifted the restrictions. Nowadays, pubs and clubs are licensed, but there is no agreement between the local authorities on what should be allowed.

The enigmatic world of the sex industry is regarded with a mix of fear and fascination; those who work in it are simultaneously vilified and romanticised. But striptease is, and isn’t, a job like any other; workers need to be tough enough to deal with the difficult and unfair working conditions that abound in the sex industry, mainly due to unfair legislation, a lack of labour rights and stigmatising social attitudes. The IUSW aims to get the laws clarified and eventually removed. We aim to raise working conditions and reach a position where sex work is not stigmatised.

We started in March 2000 as a small coalition supporting a strike in Soho where sex workers were being evicted from their work places by the local council. We created a Carnival Parade through the streets; me in the samba band, and strippers, prostitutes, sex therapists and all of our supporters dancing along.

There is, of course, an old antecedent in the world of stripping: Gypsy Rose Lee who organised a union for burlesque artists in America in 1951. In San Francisco exotic dancers at the Lusty Lady club have unionised, and sex workers in Australia and the Netherlands enjoy full union representation. But never before has it happened in Britain and we are optimistic that belonging to a union will bring about the decriminalisation of prostitution and bring autonomy to all sex workers.

Historically the striptease industry has always attracted strong women. Vocal strippers are not a rarity but are in fact the norm. If you enter any strip pub you will come across a cacophony of different female voices and attitudes. Baby Oil and Ice allows you in to this environment so that you can see and hear for yourself. Women who choose to strip for a living are often judged by society as passive victims, drug addicts or bimbos. This book gives you a chance to judge for yourself and the results are not what one would necessarily expect. Enjoy.

I see myself walk slowly as I have learned to do, shifting my weight from one hip to the other, making myself move provocatively. I pour just enough soul into the mould of this image to give it life and movement – the image of the forever unobtainable.

A quick glance around through the smoky air and there they are, their jaded-vulture eyes – some arrogant, some generous, some mocking and some benevolent – but none see me.

I find my power spot, it lies beyond their fantasies; the exchange of energy will be good here. The stiffness in my legs begins to wear off as I move. I feel the music in the lower regions of my body; it is my wand and my cloak.
And now as I find myself alone, the only woman in this circle of hungry, impoverished masculinity, all vestiges of my everyday self are covered as I start to disrobe and become the Scarlet Woman.
I am the Scarlet Woman, the alchemist who tries time and time again to turn base desire into pure gold. Me and my kind are ancient. We dare to walk the borderlands and to explore the many levels and realms of the subconscious.

I single out one of them, the punters – fag, pint and dirty cardigan.

I slide my glamour across the floor till I am swaying above him. Unwittingly I stumble through his gaze and into the futility of us being here. This saddens me, but#$ we are here and so I remove the straps from my dress revealing both nipples. It seems some basic imprinting of the breast has left our punter with the memory of a time when a woman’s love was unconditional. A time when the money didn’t run out.

All this in a flash, and our Salome turns herself on and around and pulls the dress over her ass and further to reveal the mystery that they long to penetrate.

Web spun, snake-oil spilt, and out of ankle bondage, she stretches sky-clad towards the heavens, unaware of anything but her own divinity.