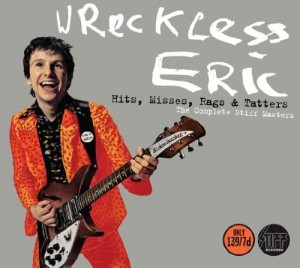 I didn’t want to write a rock ‘n’ roll biography, the sort that documents the early struggle for fame, works through a successful middle period, and chronicles the downfall via a collection of lurid drug-related episodes and boring contractual details, before finally fizzling out in a collection of lame anecdotes designed to demonstrate what a great guy I am now that life’s being good to me and I’m on the straight and narrow. WH Smith’s is already full of crap like that.

The fact is I didn’t find it very difficult to become famous, and although it lasted a bit longer than five minutes it really hasn’t taken up that much space in my life. I’ve never been all that fussed about being famous, I’d prefer recognition which is a slightly different thing. Fame is just inconvenient and embarrassing and, sadly, it doesn’t always come hand in hand with money. In the early days of Stiff Records Jake Riviera asked everybody what they wanted to be: rich or famous. I thought the answer to that was easy – I wanted to be famous because that was what was expected of me, and surely, if I had some hits I’d be rich anyway. But ‘Famous’ was the wrong answer – Elvis Costello, for instance, said ‘Rich’.

Although I never had any national chart success I had lots of indie – or alternative – chart hits and my records sold by the truckload all over the world. Everybody knew who I was, but when I finally quit Stiff Records in 1981 I left without a penny. The British music press had labelled me ‘a loveable loser’, ‘Stiff’s resident small person’, and, in a moment of extreme vitriol, ‘a stroppy, alcoholic dwarf’. That’s the trouble with being only five foot six – people tend to notice that you’re two inches shorter than everybody else, and unless you’re very strong they’ll treat you accordingly. Lack of height obviously equates with lack of intellect – at best you have comedy value. You’re somebody that the bigger boys can kick around and by so doing feel much better about themselves. It’s like being black, except that there are no laws against discriminating against you.

But it’ll only get you down if you let it. I like being the height I am and I’ve come to terms with my alcoholism – I haven’t had a drink now for seventeen years. I’ve still got all my own hair and teeth, and I’m making a real effort not to run to fat in my middle years. I’m fit and healthy, and I’ve managed to retain my sense of the ridiculous. I haven’t got any fucking money but I’m working on that. I think I’ve done quite well.

I never stopped doing music. I’ve given it up a few times, usually forever, but I’ve always come back to it. You might say that music is my life, except that you could not say that and then I wouldn’t have to throw up. In writing this book I’ve tended to concentrate on the stuff that surrounds doing music. Like I said at the beginning, I don’t want to document, chronicle and then fizzle. The music biz stuff comes as a kind of incidental to the main theme, which is the absurd life that I’ve been forced to lead as a consequence of not having a proper job. Not that I’m complaining.

I’ve talked about my childhood in ‘bungalow land’ in the sixties and all the fab groovy music that was around then – how it shaped the course of my life, how one thing led to another and I graduated from a tin banjo to an Eko acoustic to a Japanese Top Twenty to a Rickenbacker 330, and how on the way I went to art school, made some pop records, had a nervous breakdown, and wound up living in the French countryside for nine years.

I hope that my family won’t feel that I’ve done them a disservice. During my childhood and adolescence there were external, socialogical pressures which made things as they were. We had arguments, we had rows, and I found out that my parents’ aspirations were not always the same as mine. I don’t think I’m washing our dirty linen in public, but if I am, what the hell? Lots of people have to use the laundrette. What I mean to say is that I don’t think my upbringing as a middle class kid in the south-east of England was really any different to loads of other people’s. There’s nothing to regret or be ashamed of.

Looking back over my life so far I sometimes feel quite shagged out. I’m amazed at how many things I seem to have fitted in, and I’m still only halfway through (with any luck). I spent a lot of my life waiting for my life to begin, before I realised that it’s happening right now. I’m determined to make my own success of it – and I don’t really care how dysfunctional it appears to anyone else.