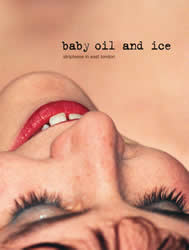 ‘Hands had to be playfully pushed away; baby oil and ice were commonplace props…’

‘I came from a small town, had studied in a very small city where I had, by my standards, been a bit wild. But stripping? If I’d ever thought of it I suppose it was in the Toulouse Lautrec style – skirts to swish, feathers to coyly hide behind. Getting your kit off in the local pub was a whole different ball game.’ – Louise

‘I always feel 10 past 1 is a bit early to be sticking your ass in somebody’s face’ — Roxanne, watching Jackie Dean do the tie routine at Solly’s one afternoon

“I am dancing and I am looking at him and I am thinking that he has nice eyes and his eyes do not follow me undressing but seem to be entranced, and perform their own sparkly number with mine.” — Liz Howard

‘Previous books and articles about stripping were written by journalists and academics. What will strike you about this lovely book is that, for once, at last you can hear the voices, the unedited words of real live striptease artists themselves. It is a treat indeed. Women who choose to strip for a living are often judged by society as passive victims, drug addicts or bimbos. This book gives you a chance to judge for yourself and the results are not what one would necessarily expect. Enjoy.’ – Ana Lopes, founder of the International Union of Sex Workers

ABOUT THE EDITOR & PHOTOGRAPHERS

‘This book seeks to provide a snapshot of strip pubs in the East End. The combination of a traditional pub with naked ladies is fast becoming a thing of the past.’

Sarah Ainslie is a photographer working in London’s East End. She has worked on dramas and documentaries – in TV, film and theatre. She has spent many months photographing strip pubs, specialising in the usually private world of the women’s changing rooms.

‘This was an invitation into another world. The women were amazing; without their co-operation none of these pictures would have been possible. It’s their strength and feeling of empowerment that remains with me. In the very intimate area of the toilets and changing rooms there were stories about their lives, laughter, banter, boredom, drinking and camaraderie. I was there when outfits were carefully chosen for each strip… and still there when the girls returned naked holding their discarded clothes. I loved it.’

Julie Cook is a London-based photographer who has exhibited in London, Liverpool, Bath and Hereford. She has taught at Bauhaus Weimar, Berlin TU and London’s South Bank University, and been published in magazines such as Bizarre, Contemporary, ES Magazine and Blueprint.

‘My fascination with the strip pubs of Shoreditch dates from the late 1990’s. Since then, two avenues of work have progressed side by side. Firstly, photographing the pubs’ interiors; and secondly, capturing images concerned with ‘looking’: featuring parts of the dancers in blur. My interest in the adult industry continues with ongoing projects in Las Vegas.’ Visit Julie Cook’s web-site