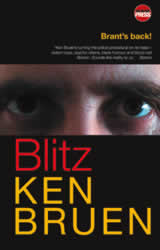 The fast moving follow-up to the ‘White Trilogy’:

The Brixton-based police squad are suffering collective burn out:
• Detective Sergeant Brant is hitting the blues and physically assaulting the police shrink.
• Chief Inspector Roberts’ wife has died in a horrific accident and he’s drowning in gut-rot red wine.
• ‘Black and beautiful’ WPC Falls is lethally involved with a junior member of the National Front and simultaneously taking down Brixton drug dealers to feed her own habit.
The team never had it so bad and when a serial killer takes his show on the road, things get progressively worse. Nicknamed ‘The Blitz’, a vicious murderer is aiming for tabloid glory by killing cops. Harold Dunphy, Ace crime reporter believes he’s on to the story of the decade and the police have never had more incentive to catch a villain.
From Absinthe to cheap lager, with the darkest blues as a chorus, The White Trilogy has just got bigger. ‘Getting hammered’ was never meant to be the deadly swing it it is in this darkest chapter from London’s most addictive police squad.

Read an extract from Blitz