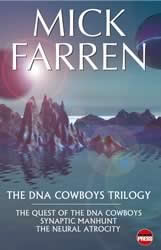 The Quest of the DNA Cowboys

plus new introduction by Mick Farren

‘Mick Farren is the dark prince of pop fiction’ – LA Reader.
According to underground legend, Mick Farren wrote this trilogy whilst ingesting large doses of LSD supplied by a pharmaceutical guerrilla group called The Midnight Brotherhood. Not true, but that the myth exists gives an indication of the bizarre pulp fiction cult that has grown up around these books and their author since first publication.
Written practically non-stop in 1975 and 1976 – concurrent with the first germination of punk rock – the DNA Cowboys Trilogy offers fantastic adventures into the unknown and unexpected.
With influences that range from Star Trek to Kung Fu and from the Marquis de Sade to Sam Peckinpah, Farren created a bizarre universe populated with pre-teen dictators, huge twin-brained domestic lizards and growing biocomputers tended by martial arts-practising monks. Farren let his imagination run wild and the results are awesome. Expect fanciful weapons, medieval jails, public hangings, Albert Speer architecture, gunfights, stiletto heels and femmes fatales in tight clothing, orgies, orgasms, and undefined monsters called Disruptors that suck up all life and logic.

• ‘(Farren’s books) smell of rum and rebellion, an impalpable haze of tobacco, gunpowder, and a whiff of burnt ozone scent that comes from an overheated laser rifle’ – Jacob Rabinowitz

• ‘As a thinker, as a writer, as a life-long participant in the avant-garde, he always produced original progressive work. He’s like the last bohemian standing’ – Mim Udovitch

• ‘(The DNA Cowboys Trilogy) comes like a breath of fresh air after all that time-warp, police box, beam-me-up bullshit’ – NME

MICK FARREN was rock correspondent, leading light and sometime editor of underground 1960s newspaper, International Times (IT); singer and founding father of the Deviants; and is unique in winning his Nasty Tales comic book obscenity trial. He brought the White Panther Party to the UK, and took a leading part in the semi-revolution that turned the Isle of Wight Festival of 1970 into a free-for-all festival. An early predictor and precursor of punk, Farren championed its cause whilst at legendary music paper, New Musical Express. Fleeing from Thatcher’s Britain in 1979, he settled in New York and then LA, where he currently lives. In his time has written 23 novels, 11 works on non-fiction (including four on Elvis) and numerous works of poetry.

Read an extract from the DNA Cowboy Trilogy 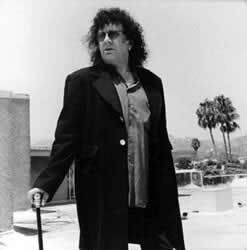