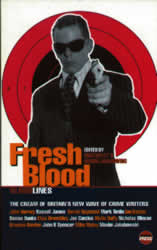 But don’t go getting the idea that this is just another crime fiction anthology… Fresh Blood features the cream of the New Wave of British Crime Fiction (the majority of stories are previously unpublished and/or uncollected), with an introduction to each from the author, explaining the genesis of their story and their attitudes to modern British crime fiction. With Fresh Blood there are no bodies in libraries; no amateur detectives; no neat moral solutions.

There is, however sex and violence (Stella Duffy, Maxim Jakubowski), professional criminals at work and play (John B Spencer, Ian Rankin), violence as black farce (Graeme Gordon), a robbery which goes badly wrong (Mark Timlin) and one which seems to go horribly right (Nicholas Blincoe), a disturbing and downbeat Inspector Resnick story (John Harvey) and an object lesson for young black Londoners in who not to trust (Joe Canzius).

To represent the work of the late Derek Raymond, the critic and guru of noir fiction, John Williams, has selected a story previously unpublished in English. From Denise Danks, a sample of work-in-progress with the first chapter of a forthcoming novel and from Chaz Brenchley, a novella showing that, however young, the past can always catch up with you. For old timeÿs sake, Russell James and Mike Ripley both offer the stories they wrote for the original Fresh Blood anthology (which never saw the light of day) five years ago.

Fresh Blood is a challenging and entertaining collection, already being hailed as a landmark in British crime fiction.

Other titles in the series: