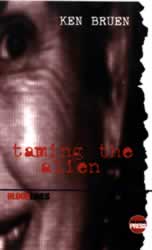 Taming The Alien is the second book in his landmark ‘White’ trilogy, centred around the exploits of Detective Inspector Roberts and Sergeant Brant of the Metropolitan Police. It follows on from the acclaimed A White Arrest, taking the action from south-east London to Ireland and New York.

“If Martin Amis was writing crime novels, this is what he would hope to write.” – Books in Ireland

“The most startling and original crime novel of the decade.” – GQ

“Bruen’s ability to keep the reader’s interest in an unsympathetic character merits comparisons to Thompson’s The Killer Inside Me” – Jon L Breen, Ellery Queen Mystery Magazine (**** review for The Hackman Blues)

“….a very stylish writer. Violence, drugs, double-crosses and emotional betrayal all feature against a background of sleazy London hotels and warehouses, and Bruen keeps the tension agonizingly high throughout. Very, very good.” – Tribune

Click to read an extract from Taming The Alien